Here are the magic items acquired by the party during Tales of 13th Age Wyrd of the Wild Wood Part 3 & 4.

Magic Items obtained from Part 3 – The Tower of Alamede

Ironoak Shield of Protection
This shield, though made of wood, has the strength of wrought steel. When a druid dies, her companion tree is made into an ironoak shield so that even in death she may continue to protect the living.
Default bonus: Increase your maximum hit points: by +4.
Enemies engaged with you take a –1 attack penalty against your allies.
Quirk: Tends to others with too much familiarity.

Prismatic Rod
A long pyramidal clear crystal serves as the handle to this wand. The end is tipped with a dark glass or obsidian. It constantly bathes the wielder’s hand in a faint rainbow..
+1 to hit and damage with arcane spells and attacks.
Once per day cast Color Spray at your level, as a quick action.
Quirk: Insists on speaking each letter of a word distinctly.

Brachiating Bracers
These armguards have an embroidered motif of branches and leaves. They subtly bend wood and vines to their wearer, making it easier to climb and swing through the trees.
Add +5 to checks involving climbing.
Gain the ability to traverse heavily forested areas as though flying while not in combat.
Quirk: Always seeks something higher than ground level to stand upon.

Note:  The organized play packet outlined three magic items that the party would discover in the attic of the Tower of Alamain.  The party was given a chance to discover additional magic items during the exploration phase of the tower if they passed a background check with a DC 30.  Background checks in 13th Age work like this:  You roll a d20, then add that value to any relevant ability modifier + level + the number of points in a relevant background.  That total is compared to the DC set by the environment.  The tower environment had multiple tiers from 14 – Danger! to 30 – Magic Item!  Passing a 30 DC is rather difficult.  Breaking the numbers down, backgrounds have a max of 5 points (6 for a bard), level is 2, and ability modifiers for our pre-generated characters cap at 4 (5 is max, but we avoid it as it puts too many other stat mods in the negative).  So to pass a D30 check a player would have needed to roll at minimum a 19 if they had a relevant background and modifier at max points.  Possible, but unlikely.  No one in the party passed a DC 30, but the players did manage to pass a DC 15 to find spell components that grant +2 to ritual check, DC 20 for an adventurer -level rune glowing in an old book, and a DC 25 for two healing potions found behind a cupboard of mold-encrusted jars.  The three magic items obtained above were outlined in the organized play packet, with one minor adjustment.  The organized play packet calls for the Ironoak Shield to have the power “Resilience” meaning when you make a basic melee attack, heal using a recovery (recharge 11+).   Since we had already given a Shield of Resilience to Vaelen during Part 2 of Wyrd of the Wild Wood we simply re-skinned the Ironoak Shield in our game to grant the power “Protection” instead.  The flavor text description and +4 default bonus to hit points was kept the same.

Magic Items obtained from Part 2 – Through the Wild Wood

Ring of the Mage’s Invisible Aegis
This ring is a remnant of a wizard that served at the Citadel of Autumn’s End. The spiritual powers of the Aegis have infused within the ring granting it powers of protection to the wearer.
Recharge 16+
Effect: You can use this ring to cast the wizard’s Shield Spell, with a level no higher than your level.
Shield Spell: When an enemy targets your AC, make the attacker re-roll their attack roll and use the new result.
Quirk: Hums Tunelessly

Potion Belt
This fashionable leather belt can be adjusted to be worn by anyone. It also provides stylish flaps that can hold up to six potions.
Recharge 16+
Always: Increase Your Recoveries by 1.
Effect: You may drink a potion stored on this belt as a quick action instead of a standard action.
Quirk: Constantly attempts to refill everyone else’s drinks. Or potions. Or ration bags.

Here are the magic items acquired by the party so far during Tales of 13th Age Wyrd of the Wild Wood.  The first two items were acquired during the last adventure – Wild Things – and the last two were obtained during part 1 – Darkskye Crashdown. 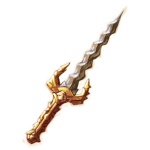 Icy-Touched Blade
This ice-cold ghost blade is all the remains of a wraith that once haunted the plauged hospital ruins of a previous age.
+1 Longsword
Recharge 16+ after Battle
Effect: Once per battle when you make a basic attack with this weapon you deal an additional 1d4 cold damage. If you hit, the target of your attack is weakened (-4 to attacks and defenses) until the end of your next turn.
Quirk: When idle you can’t help but sing hauntingly eerie tunes.

Shield of Resilience
The original owner of this shield has long passed from this world, but this shield looks the same as the day it was freshly crafted.
Default Bonus: Increase your maximum hit points by +4.
Recharge 11+
Effect: When you make a basic melee attack, heal using a recovery.
Quirk: Eats an odd vegetarian diet and advocates it loudly. 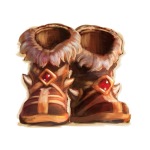 Boots of the Slippery Eel
These soft boots are made from the skin of giant black eels that live among the Wake Island in the Midland Sea. The eel skin soles are surprisingly resilient and slick.
Default Bonus: You gain +1 to your disengage checks.
Recharge 11+
Effect: Reroll a failed disengage check
Quirk: Loves puns

Greatsword of the Bear
The sheer weight of this weapon looks like it would slow the wielder down, but the damage from a mighty swing would be deadly.
Greatsword +1
Recharge 6+
Effect: You may spend your move action to add +1d8 damage to your next melee attack this turn. If you miss, you take that damage instead.
Quirk: Tends to Break Things.

Here are the magic items acquired by the party so far during Tales of 13th Age Crown of the Lich King. The first three are featured in the 13th Age book and the fourth is a magic item written into the organized play packet. The organized play adventure lists Silverflame as a magical weapon that can be gained from Shez-a-kah if the party passes DC skill checks. In our adventure we changed it slightly so that Silverflame was found in the icy dragon cave among a pile of bones, no doubt dropped from some unfortunate soul who ended up as a dragon’s meal.

Jeweled Glove (Recharge 6+)
A single glove befit with a variety of jewels. It sparkles magnificently in the light.
When you cast a divine spell, allow one nearby ally to roll a save against one ongoing save ends effect as a free action.
Quirk: Alternatively paranoid that people are looking too closely at your precious jeweled glove and upset that people aren’t paying enough attention to your amazing jeweled glove.  (Blog Note – Read part 2 bluebook posts to see how we played this quirk out.)

Belt of the Boar
A Chain of Linked Plates, the buckle depicts a boar charging.
Increase your Maximum Recoveries by 1
Quirk: Hard to resist taking seconds at dinner.

Silverflame
This stylishly curved blade seems to shift as it moves, growing new protuberances and shifting its weight to better harm enemies. The silvery metal of the blade is warm to the touch, and will burst into flame when the elven words engraved on the pommel are spoken aloud by its wielder.
[Melee Weapon]
+1 bonus to attacks and damage.
Always: This weapon does fire damage.
Always: While you are in a battle against a dragon or a draconic or reptilian creature (like a kobold or hydra), until the end of the battle you deal +1d6 damage with all attacks that hit using this weapon, even if they are not against dragons or reptilian enemies. Whoever crafted this weapon really didn’t like dragons. I wonder if their spirit still lingers within the metal?
Recharge 11+: As a free action the sword may shape-shift into another heavy or martial melee weapon (longsword, greatsword, axe, war hammer, halbard, lance, etc).
Quirk: Hatred of anything scaly.

Bonus material:  Here’s a great photo taken of our first Tales of 13th Age adventure by Josh, the owner of Fair Game store! 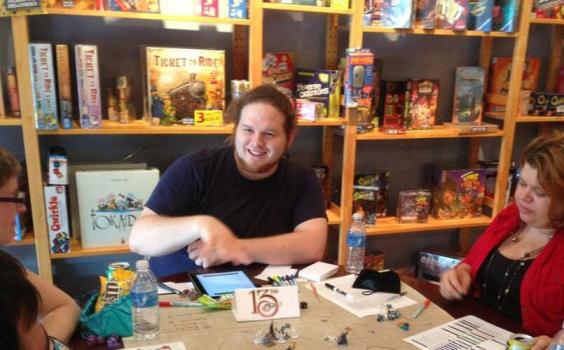