Adventure 1 – The Prisoner of Roachdale

When the rampaging Orc Lord summons you, Alleric knew to answer. The Lord commended his lieutenant, Alleric, for striking fear and respect into his enemies. However, not all in the world gave him the respect he deserved, and a reminder needed to be sent. None are safe from the Orc Lord’s wrath, not even the Lich King. Alleric was sent to destroy the Crown of the Lich King, striking a blow against the legion of undead. He was to rendezvous with a paladin and priest at a village in the Fangs and trick them into thinking he was joining their party as a means to redeem himself from his wicked past, thus hiding his true intentions.

Augustine, a human paladin, and Deneveve, elf cleric, were already together when they received correspondence from the Priestess. She had received a vision hinting to the location of an artifact that the cathedral had long lost – An artifact of a long forgotten dark god. The crown rested in a twisting labyrinth which only had one escapee – Jont Urner the famed explorer who had gone missing in the depths of Roachdale, a living dungeon. Augustine had experience before hunting down living dungeons alongside the Crusader so he described Roachdale to his allies. Roachdale was unique. It was a recurring living dungeon and host to a demonic plague. Alleric joined the party shortly thereafter, hiding his goal to destroy the Crown.

The traveling through the fangs was slow going – Traveling in marshlands is no easy task. After traveling through insect filled marshlands, Roachdale came in to view before them. A giant demonic fist thrust through the ruins of a small village with a sea of giant insects circling it like a small island. Deneveve had been blessed by the Priestess to be able to find and sense evil (one of her backgrounds) so she meditated for a moment to understand her surroundings. What she felt was an intense presence of sickly infectious evil resonating from the dungeon itself, corrupting all it touched. The mass of insects was infused with a ravenous unnatural hunger, endlessly devouring each other and anything they came across.

Alleric knew a thing or two about magic, having studied dragon magic with the Three, and stated that the best way to get across this river would be to generate some kind of holy energy. Deneveve noticed that she had ritual magic on her character sheet and the spell Shield of Faith. When she started to put together the spell, she realized that she would need an element of the corruption and some kind of holy item designated to keeping things protected or safe. Augustine offered a piece of the foundation for the Cathedral, citing that he had once worked as a mason on the Cathedral. With all their reagents assembled, Deneveve cast her spell and moved forward into the insect sea. A soft yellow glowing bubble surrounded the party and the insects were deep enough that they covered the top of the barrier.

When they reached the other side, thoroughly disgusted, the dungeon rose up before them. They snuck toward the fist and found a small collection of plague corrupted villagers standing guard. Alleric, having some tactical history with the Orc Lord, deployed his allies to strike at all angles. He then charged in and froze the three villagers with a strong Breath of the White. Augustine followed right after, cleaving through two of the dretches, sending them flying. Deneve invoked her deity of war and pushed her allies onward. In short order, their foes fell before them. 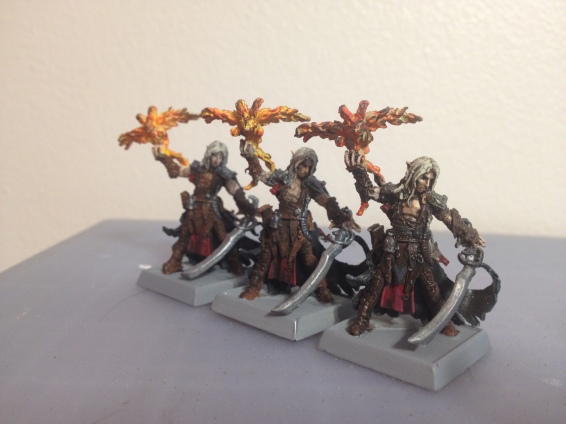 Deneveve continued her efforts to ward off evil as they entered the dungeon. Using a relationship boon from the Priestess she recalled a simple prayer from the Priestess to reaffirm her faith. Her barrier held strong, protecting her fellow adventurers from the demonic corruption. Augustine again cited his past with exploring living dungeons alongside the Crusader. While every dungeon was different, he knew where traps and pitfalls would reside. He prevented Alleric from getting skewered by a bone spike trap, and stopped Deneveve from falling to her death. To navigate the dungeon, Alleric tried to continuously sense magical energies. He detected a very faint but unique signature of magic unlike any other within the dungeon. He was able to help guide the way and eventually realized the magical signature as being Ancient Draconic.

Deep into the dungeon they started to taste the air sicken. They heard screeches resonating throughout every chamber, and the hair on their skin rose. When they came upon the heart of the dungeon, they find the literal heart of the dungeon, a foul green pulsing thing in a large round room. The cavities along the wall were lined with bone and behind one of them was the unconscious form of a half-orc with silver runes all across his back.

Deneveve rushed to help the half-orc followed closely by Alleric who was interested in the runes on his back. Augustine, wary of the dark corners in the room, kept watch. He had just enough time to yell a warning before the they are attacked by Vrock, a vulture demon from the Abyss.

We did not have a vulture demon miniature, so we subbed in a crazed owlbear.

Vroch slammed down on to him from above, digging a talon deep into Augstine’s shoulder. The Vroch followed with a sharp strike against Deneveve and shook them all to the core with a screech. When the party recovered from the shock they were determined to kill the demon.

Deneveve prayed for healing on Augustine’s ravaged body. Alleric unleashed a Breath attack on the Vulture demon and watched as her blast knocked parasites loose all over the room. When it came to Augustine, he summoned the strength of the Gold Wyrm and declared a smite against the monster – And scored a crit! His blade glowed yellow as he raked up the Vroch’s wing. Angered that the Paladin brought something so holy into his den, the Vroch unleashed all his attacks on Augustine, staggering him and screeching at his allies. Deneveve’s faith held true, binding Augustine’s wounds back together. The sorcerer sent spell after spell at the parasites and Vroch, unleashing as much magic as he could.

Augustine again went to smite the demon – and on another crit! The Vroch took the glowing holy sword straight to the chest but was still in the fight. Blow by blow followed and the Vroch eventually crumpled down into the nearby pit. The parasites were quick to be defeated and the party took the time to recover. Deneveve tended to Jont while Alleric examined the runes that covered the half-orcs body. Alleric discovered that the runes were a type of codex and the only way to decipher the language was to find a piece of the dragon line that created these runes.

Not to leave a living dungeon established, Augustine instructed Alleric to destroy the heart of the dungeon. With a chaos bolt to the heart the dungeon shrieked and groaned as it died and started crumbling back into the earth. All three adventurers raced out of the dungeon and made it to safety before the fist submerged into the ground. Now, to find a Dragon…

“Most excellent adventure. Good mix of storytelling and whupping baddies. I’m starting to get into this sorcerer…. and I probably got to do and learn a lot more about playing sorcerers since there were only the three of us. My gain. :-D”  – Player 1, Alleric
Follow @ZabbyMonky (Sarah)   Follow @JssSandals  (Ben)